In anticipation of visiting San Sebastián, Spain next week, I wanted to highlight some of my favorite small cities and towns around the world.

I’ll kick off with Kinsale, a medieval fishing port turned “Gourmet Capital” on the Southwest coast of Ireland. Located in the province of Munster about 27 km/17 miles from Cork, Kinsale is known as Ireland’s Riviera.
I think I originally fell in love with Kinsale because it reminded me so much of Sausalito in my hometown of Marin County, California. Cafés, pubs, and restaurants line the River Bandon. (Which looks far more like a bay than a river.) The locals are warm and quick to tell excellent stories. And a stroll along the grassy knolls often leads you to what look like abandoned castles.

My father took this photo of me in 2005, jumping around Charles Fort, a military base on the water’s edge. (James’ Fort is located on the opposite side of the harbor.) If you find yourself in Ireland soon, Kinsale is definitely worth a visit. 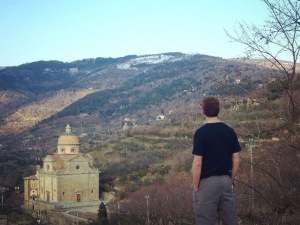 About a decade ago, I stumbled upon Cortona, a small town perched on a mountaintop in the province of Arrezo in Tuscany, Italy. Traveling from Florence to Rome, I hopped off the train for an afternoon of exploration. Cortona was everything I wanted in a small Italian town – familial and romantic, featuring cobblestones and architecture rich with history, and a sunset view of Tuscany that would bring me to tears. (Alas, while the town was featured in the 2003 film “Under The Tuscan Sun,” Diane Lane was nowhere to be found.) I always encourage people to hop off trains while in unknown territories. You can always catch the next one, and you just might find an adventure you’ll be talking about for the rest of your life. 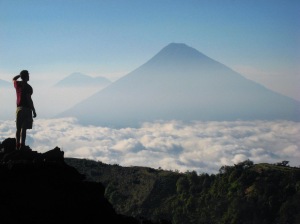 I’ve been to Guatemala twice, once at age 15, and again at 23. I went to volunteer at El Hospital de la Familia in Nuevo Progreso with my father, who’s been making the trip annually for decades. Of the many towns I love in Guatemala, from Tikal to Atitlan, Antigua always stands out as a special place. This photo was taken just outside Antigua at the peak of Mt. Pacaya, an active volcano. Want a one of a kind experience? Hike up some molten rock to the clouds, and watch the lava flow in crevices just a couple feet below you. 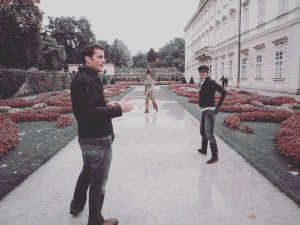 I went backpacking through Eastern Europe in 2007 in search of my great-grandfather Leo’s art. He attended art school in Vienna at the turn of the 20th century. So I knew, at the very least, that Austria would be on the itinerary.

En route to Vienna, I spent a few days further West in Salzburg, birthplace to Mozart, home of the world renowned Salzburg Festival, and backdrop to the 1965 classic, The Sound Of Music.

Now I haven’t cried a lot in the last 10 years, but I did produce those perfect, slow-to-trickle-down-the-cheek Demi Moore style tears in Salzburg. And I encourage you to do the same.

Visit the Schloss Mirabell, admire the palace’s Baroque interior, walk up and down the Donnerstiege, a spectacular marble staircase. Then take in a performance of classical chamber music inside the Marble Hall. The night I visited, I was treated to a Dvořák string trio. It was the most beautiful music I had ever heard. (Cue those tears.)

If you have a spare day, I also a recommend a day trip to Mondsee, a lake town 27 kilometers outside the city. Enjoy a delicious Viennese coffee, then recreate Maria and Captain’s wedding in the historic medieval Mondsee Abbey.
Well, that’s what I did.
Advertisement