My hand won’t stop twitching. My feet won’t stop shaking. After more than 8 years living in that bustling metropolis known as New York City, I’ve returned to Los Angeles for an extended stay and my teeth won’t stop chattering, my mind won’t stop racing. Why is everyone on the couch watching Netflix at 2 pm? Why is everyone in bed with a dog by 10 pm? And how is it that every single Angelino qualifies for a medical marijuana prescription? It’s as if the qualifications were A) You’re human, B) You’re alive, and C) Haha. That’s it bro. Here’s your bag of Purple Dinosaur.

After 8 quick years, have I become addicted to the rush of New York City? Can I no longer keep still? Wasn’t the initial point of this blog to acknowledge the extraordinary in the ordinary, the great adventure in everyday life? Perhaps my biggest mistake was self-proclaiming myself The Adventure Addict to begin with. If I had initially decided instead on, say, The Apathetic Vagabond, The Nonchalant Explorer, or heck, even The Folksy Flaneur, maybe the idea of a carefree, casual Tuesday afternoon would not totally terrify the fuck out of me.

In New York, I wrote lists. Every day. List making was MY medical marijuana. I’d make lists in the frigid jail cell I call a bedroom. I’d make lists next to a splatter of vomit while I waited for the train, already packed so air tight that businessmen would have to circular breathe between their mouths, nostrils, AND anuses.

So last night, after enjoying a gluten-free vegan meal and a dip in the backyard hot tub, I decided to make some lists. I wrote down 25 things I love about New York City. And 25 things I hate about New York City. And 5 things I love about Los Angeles. And 5 things I hate about Los Angeles. See, despite living in LA for 5 years prior to moving to New York City, I couldn’t come up with any more things I loved OR hated about LA. This was interesting for me to note. Life in New York is 0 to 100, often in the same hour. In New York, I’ve experienced my highest highs and my lowest lows. Life in LA is generally more consistent. Pleasant, maybe even lovely, if not terribly interesting. A day’s biggest win shouldn’t be progressing a mile in less than an hour on the 405.

If I do 5 things a day in LA, rather than 25 things a day in New York, am I being less productive? Or is the key to productivity in NOT multi-tasking, in NOT running around, in NOT beating the clock? But in working in focused, isolated chunks, allowing my mind the space and pleasure to pause and reflect in between. What does productivity mean anyway? Could a 2 pm Netflix binge provide just the inspiration I was searching for? Will going to sleep before Midnight make for a new, relaxed and genuinely alert day? When did that tree climbing, cloud watching, smoothie making kid grow up to be the personification of a triple soy latté no whip? Gross. At least enjoy the whip, Mikey.

Now this is all just a lesson for me in perception, of both the internal and external sorts. In debating where I could be happiest, and where I am most likely to thrive, the answer really is: anywhere. As long as I do work I care about, and am surrounded by people I care about, I find that I’m a generally happy camper. I believe that’s true of most people.

When I think of New York, I can focus my attention on small apartments and jam packed trains, or I can choose to think about the glow and vibrancy of Lincoln Center, the autumnal park strolls, and all those gems tucked away into hidden corners. “The map is not the territory,” a friend said to me the other day. We all make our own maps. My map of New York is different than your map of New York, and neither is the territory. I can say LA is a place that makes me less productive, or I can just choose to work at being more productive, wherever I may be. (Again, whatever that means.)

“Who is that woman in the mirror with all the wrinkles,” my Mom said to me over the holidays. Talk about perception. She could barely recognize herself, as if time had suddenly catapulted her into the future with weight and responsibility, without care or warning.

Aging is a funny thing. Sometimes I sit across from people I think of as “adults”. I engage in quiet, adult conversation. I nod and scratch my beard. In my mind, I am flying around a track, acting recklessly silly, bouncing off walls and screaming and picking my nose. But you’d never know that. At least not most of the time. Because at a certain age, we’re supposed to “act our age”. We’re supposed to be Adults with a capital A. But the older I get, the more I realize that we’re all just acting at what we think an adult is supposed to be like, my Mother included. In fact, we’re all still children among the stars. None of us got the handbook. Every one of us is just floating weightlessly in space, grasping for solid matter to tether ourselves to.

So I’m going to forget all these neurosis inducing Adult questions for a second. Children work better with YES or NO questions, right? So scratch, “Where in the world will you be most productive?” Also, good-bye, “Where will you be most happy?” As if life shouldn’t warrant or value or necessitate all the other emotions.

“Ask yourself whether you are happy, and you cease to be so.”

Instead, I’m going to get out of my head and try something more tangible:

Wherever you are, are you continuously finding ways to gain pleasure?

Are you contributing something helpful or meaningful to the world around you?

These questions require reciprocity in my actions. They require engagement with others and the world around me. They get me out of the floating space in my mind and give me solid matter to tether myself to. It seems the older we get, the more attention we pay to selecting and developing our internal states, rather than our external ones. 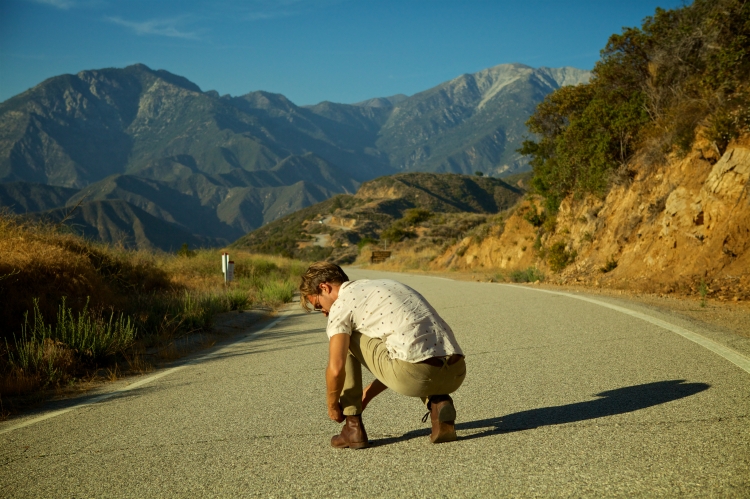 I always did love a good montage.

But to master the ancient art of monTAGing, a pupil must first gain practice with the montage’s half dumb little brother, the COLLAGE.

Like any other suburban 12-year-old girl with a subscription to Teen Vogue, my collaging skills have evolved over the years.

If you scroll down to Adventures In Making Sense Of Your Childhood, you’ll see some of my early work, a pop culture collage of everything 1998 that still hangs on the wall of my childhood bedroom. (I recently discovered 12 other collages hidden in the bowels of my closet – from history projects to 9-foot long homemade X-Men posters, the top THIRD of which is shown to the right.)

Over the years, I’ve taken to making collages more so for other people, whether it be taking photographs of my family and printing them on slabs of wood as a birthday gift, or photographing friends spelling out “Have Yourself A Merry Little Christmas” word by word over many years of Hanukkah parties as an ongoing holiday card. We’ve got one more verse to go! (See below) 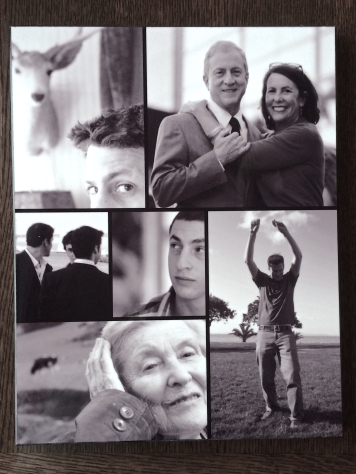 (Even this past December, when a casting director suddenly asked me to put together an acting reel in less than 90 minutes for a part in a major studio film, I had no choice but to – you guessed it – make one giant montage of YouTube style silliness. It feels like I made a blooper reel for an idiot’s funeral. You can check out the Oscar worthyness HERE.)

Our lives are already vivid tapestries, aren’t they? I just have a compulsion to translate and realize that notion in a visual, artistic way. I enjoy building things. I revel in the act of creation. I’m enthralled by the connection of color, tone, aesthetic, feel, mood, narrative, design, discord, direction, and placement.

I lived in Los Angeles from 2002 to 2007. I returned this month for a week and a half trip after a two-year absence. I was amazed to see how much the city has developed since I left, and in my humble opinion, how much more culturally expansive and compelling it has quickly become. On a more personal level, it was wonderful to reconnect with old friends as if little time had past. (Though it so clearly had when three friends revealed their pregnancies.)

To adhere to the mission of this blog, and savor simply the extraordinariness of old friends, I chose not to embark on too many epic adventures. I almost went on two spontaneous trips – one to Mexico, the other to Joshua Tree – but I refrained. I know I can stay put for two minutes. I know it. So while I’m clearly working on my addiction to adventure, perhaps my addiction to MONTAGE is a healthy addiction. Like. My addiction to oxygen, you know? Especially when it produces this many smiles. So enjoy this love letter to the city of Angels from some of my SoCal pals, and Happy Valentine’s Day to you and yours.